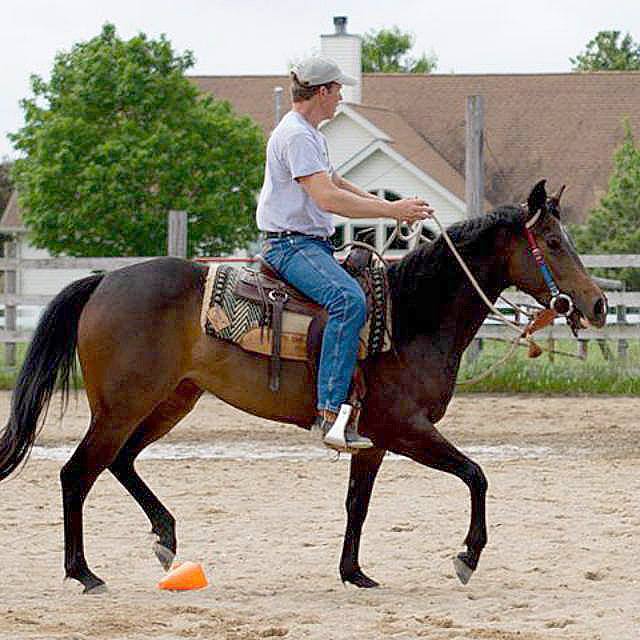 Why did you choose to become a horse trainer?

Growing up I always had horses—there are pictures of me on a horse in diapers. My dad put me up on his horses and led me around, pretty much as soon as I could sit up on my own. About the time I was four I was riding on my own, doing some Peewee classes at horse shows. By the time I was nine, I was riding my dad’s horses and competing at shows. When I was ten, I started competing against adults in the same classes that my dad was in and I was competitive. I spent a year running junior classes, and my dad realized I was running times that would win in the open classes. By then I was hooked on it. I loved the speed of the higher level horses. 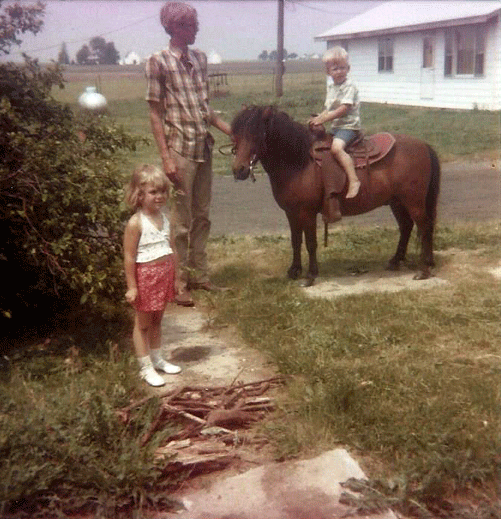 Becoming a horse trainer mainly resulted from the fact that we didn’t have a lot of money when I was growing up. To be able to compete, we looked for horses that were competitive but had something about them that devalued them to other people. We looked for horses that had problems that we knew how to fix, such as horses that didn’t want to go in the arena that were gate sour. Over time the list of problems that I knew how to solve got bigger and kept growing. At some point people started to notice how my horses changed, and they began asking me for advice with their own problem horse. Training became something that I just kind of fell into.

It took me a few years of working other jobs and gaining enough skills that I felt I could make a living at it. Part of it was also having the right horse to help get your name out there. That’s what my horse Vinnie did. Ultimately, what made it happen was when I sold Vinnie, and then bought him back a year later. During that time his owner created a lot of issues for him and I had to go through the process of trying to fix him. I had to go out and improve myself more. What I had done to make him a good horse in the first place was not enough to fix him after I got him back.

How would you summarize your approach to riding lessons and training?

I used to call it a back to basics approach, but now I really focus on how horses communicate with one another, herd behaviors, the psychology of the horse, and teaching people how to communicate with a horse and how to build relationships. What you’re doing when you’re starting a horse or training one, is just working on that communication. It’s about understanding movement in the feet and how to get control of them. When I think of riding now, I think of it more in terms of the feet than I do manipulating the horse’s body from the saddle.

What is the most important thing you teach your horses and students?

Working and being together. Think of it as developing a relationship with the horse so that we can be together, do things together as a team, and to be able to be the kind of leader that your horse would choose to follow. To be a leader, you need to know when you should work on yourself before working on the horse. Assuming the horse is always the issue can cause a lot of problems for you. The other thing I do is work on balance, because if you’re off balance how does your horse know when you’re just trying to stay on or when you’re trying to communicate something to them.

The wake up call is when they either get hurt or nearly get hurt and become afraid of their young horse. That’s usually about the time they seek help. At that point I focus on working on the skills gap. Working with the horse to get the basic skills they need, and raising the skills of the rider so they can meet somewhere in the middle and have some success.

People think they’re going to get a young horse so they can learn together. They think this will create this lifelong bond. Some people also see it as a short cut to them learning how to do it the right way. They think that the horse will learn to do things their way and they’ll always be right because the horse learned it that way. But if what they’re doing isn’t a good starting place for the horse, then they’re never going to get to that point.

Are there any characteristics that successful students have in common?

Be willing to work on yourself. You have to be patient, because you are not going to make changes in yourself instantly, it’s not going to be instantaneous success. You have to be willing to do hard work and you’ll eventually reap the rewards. You have to enjoy the process of learning, and not just be totally focused on the end result. If you are the type of person that can come to a lesson, work on something and enjoy getting better rather than having to do the task perfectly to feel successful then you have a much better chance. Perfectionists struggle, but they can still be successful. But it’s difficult because they want to be good yesterday.

What’s the most rewarding thing about your work?

Two things, one—making people’s dreams of having that relationship with a horse come true, and two—I get a lot of satisfaction out of improving a horses future. Their chances of having a good life are much higher because they’re nice horses to be around. Whenever a horse is in a situation where they weren’t a bad horse but someone didn’t feel safe around them—that means their future is uncertain. People generally don’t want to put out that kind of money to have a horse that they don’t feel safe around.

Barrel Racing – what shows have you won?

With Vinnie I won so many barrel races I can’t even remember. Starting at his 5-year-old year till he was 14, Vinnie qualified for the NBHA except for one year, which is when I didn't ride him. Between Vinnie and Boom Boom, there was only one year out of 14 years that I didn’t qualify for the NBHA World Show.

The Trainers at DWH 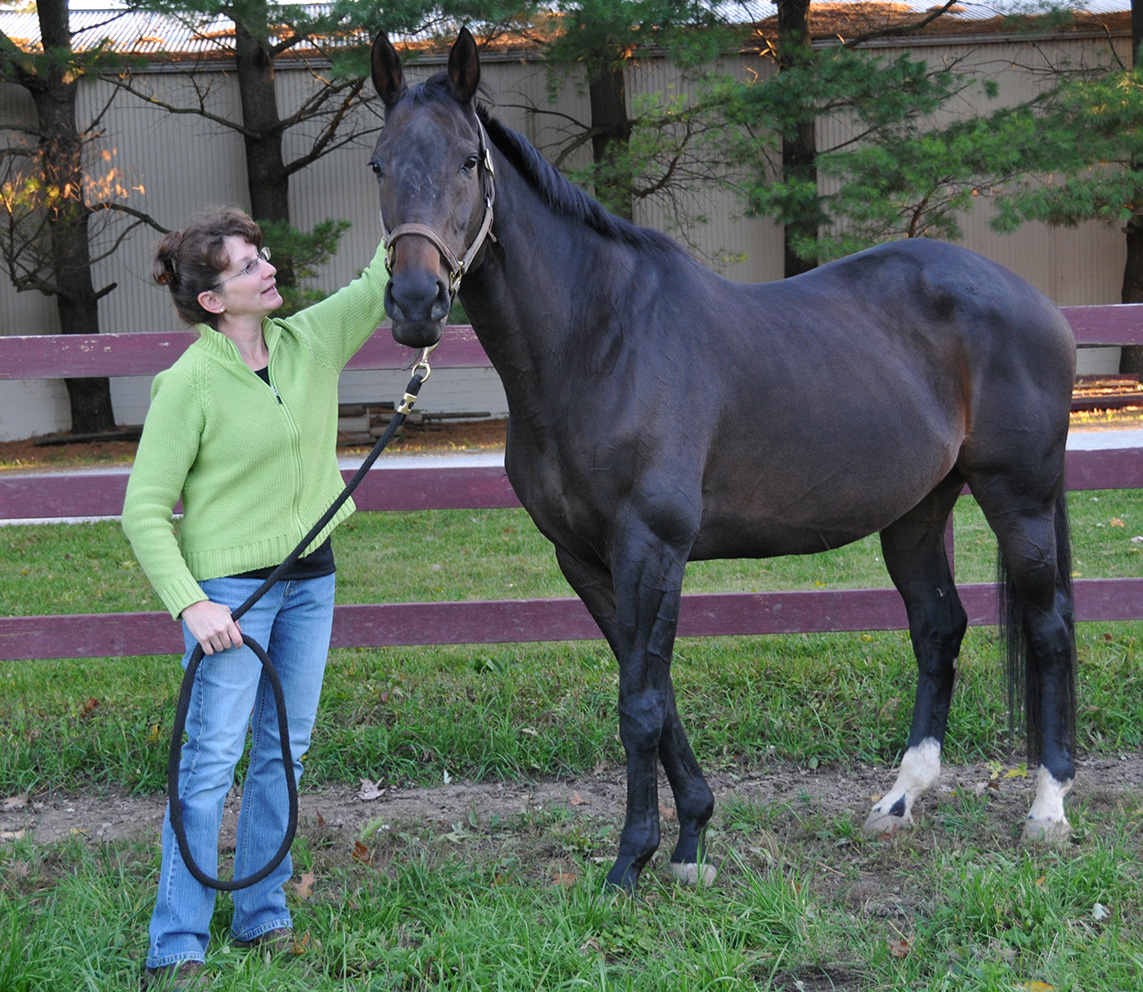 Martha grew up with a passion for horses, but never thought she would have the joy of working with them as an adult. As a trainer since 2013, she enjoys more than anything else, passing on what she has learned to others.

Martha teaches beginner horseback riding lessons at Darren Woller Horsemanship. Through her training students learn not only the fundamentals of riding but how to care for, safely handle, and ride using natural horsemanship. To learn more about Martha and her training methods visit: http://www.pegasuspathllc.com 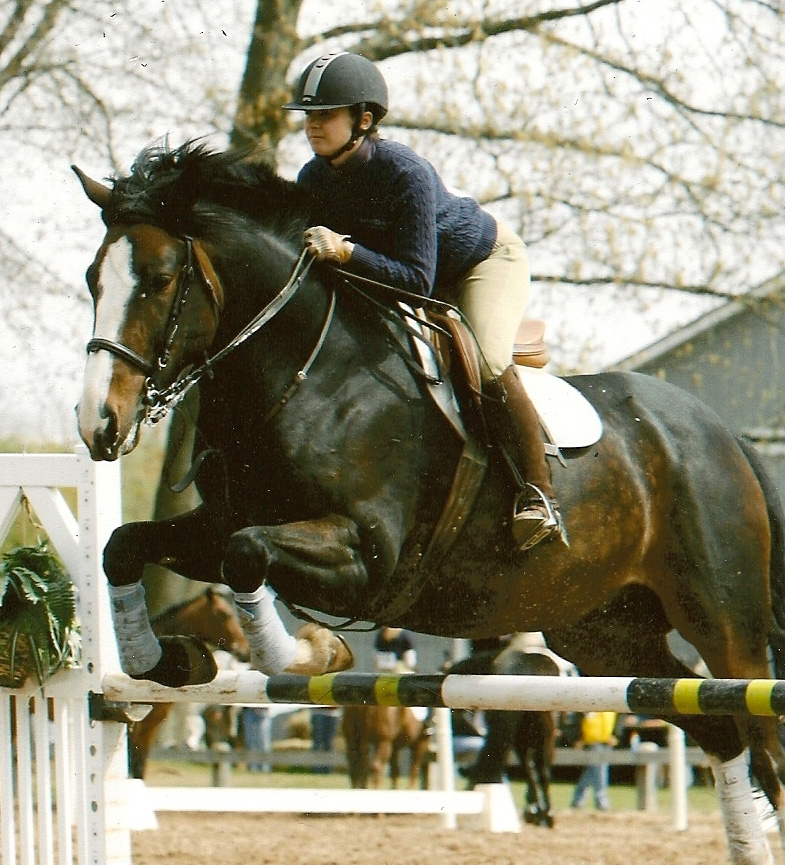 Gilly McPhee is a 2001 graduate of Mount Holyoke College in South Hadley, Massachusetts.  During her college career, Gilly competed at the IHSA National Horse Show three times. She worked as the Assistant Varsity Equestrian Team coach from 2003-2010, helping lead the team to a National Championship, two Reserve National Championships, and numerous Individual National Titles.  She currently resides in Urbana, Illinois where she teaches and trains a diverse group of horses and riders, focusing primarily on Hunter, Jumper, Equitation and Dressage.

The Horses of Darren Woller Horsemanship 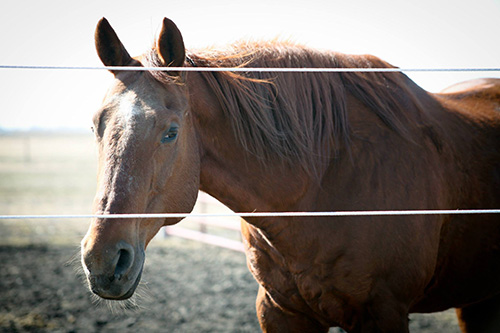 Darren acquired Vinnie when he was 4 years old, and at the time he had already been started for barrel racing. It took Darren about a year to take him from being started on barrels to a very competitive racer. Towards the end of his 5-year-old year, Vinnie started winning barrel races, which continued through his 8-year-old year. At that point whenever the two didn’t knock a barrel, they always made the top 4 at competitions with 100-200 horses. There were some races they won by such a big margin that Vinnie was the only horse in the 1st Division.

Vinnie became the foundation of the lesson program when Darren started teaching in 2009. As a 4 year old, Vinnie’s previous owners called him the baby sitter. They owned a few horses that were older than Vinnie, but they always made sure to put beginners on him—which is not something you normally do with a young horse. However, Vinnie just has that personality where he will take care of everyone. There’s not a mean bone in his body, and he’s one of the calmest, most gentle horses you’ll ever meet. He’s perfectly suited for riders of all skill levels, and has helped many kids and adults start their riding careers.

Skylar has done just about everything. His previous family owned a sale barn for cattle, and used him to push cattle through the chutes. He was then sold to a second family who used him for junior rodeo—where he competed in roping, barrel racing, and pole bending. He’s a very experienced little pony, and goes a long way as a lesson horse. When a friend’s daughter outgrew Skylar, Darren kept him for lessons. Skylar has taken kids through their first barrel races and pole bendings, and has taught numerous kids how to ride. 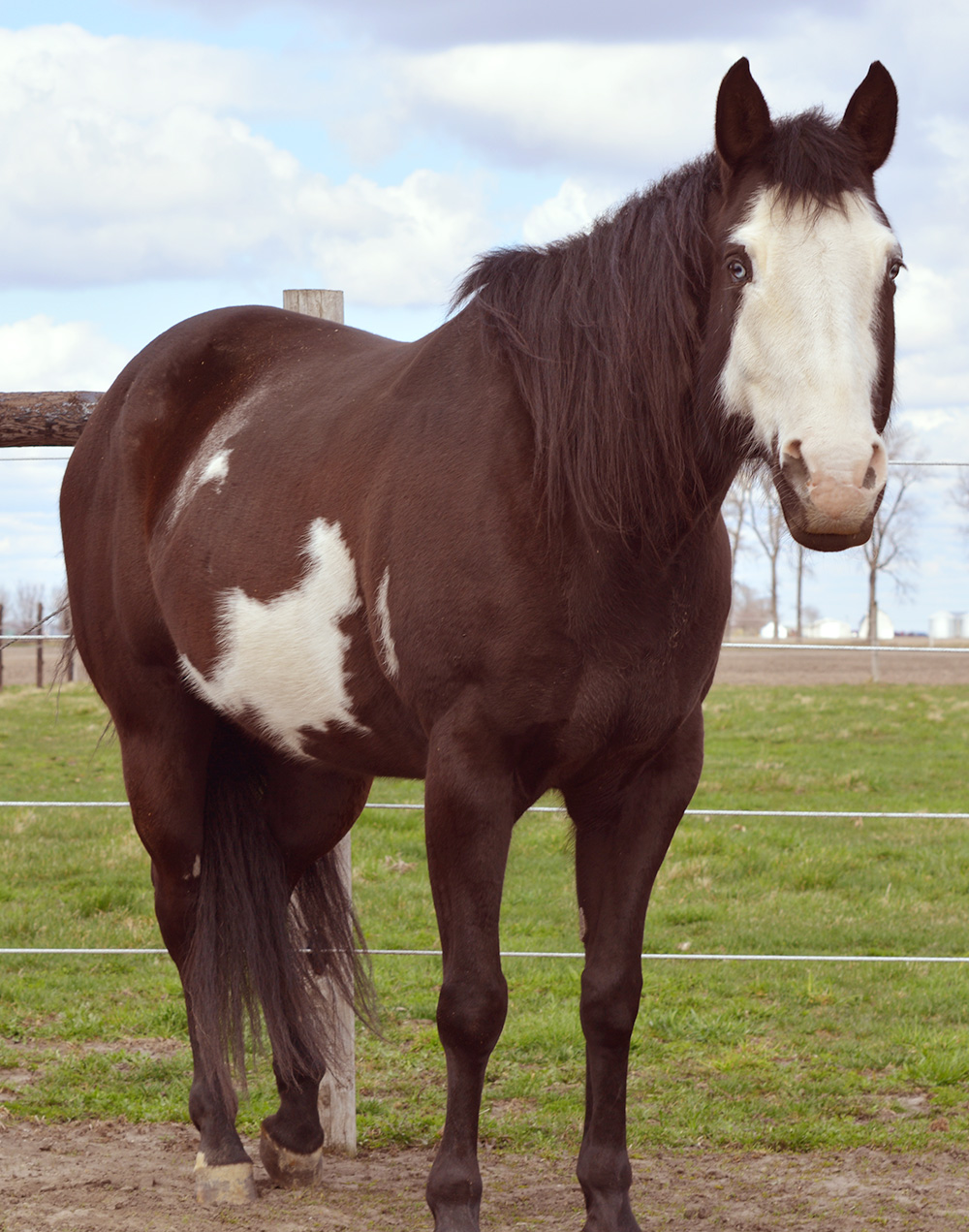 Angel is a Paint horse that’s a new addition to the lesson horses. Angel had been ridden both for English and Western and was used in some beginner English jumping lessons. She’s an extremely sweet, calm, and just an all around happy-go-lucky horse. Angel has a very smooth gait, which makes her a wonderful lesson horse. She has a fluid walk, trot, and canter and her size makes her suitable for a wide variety of riders.

Gypsy – the work in progress 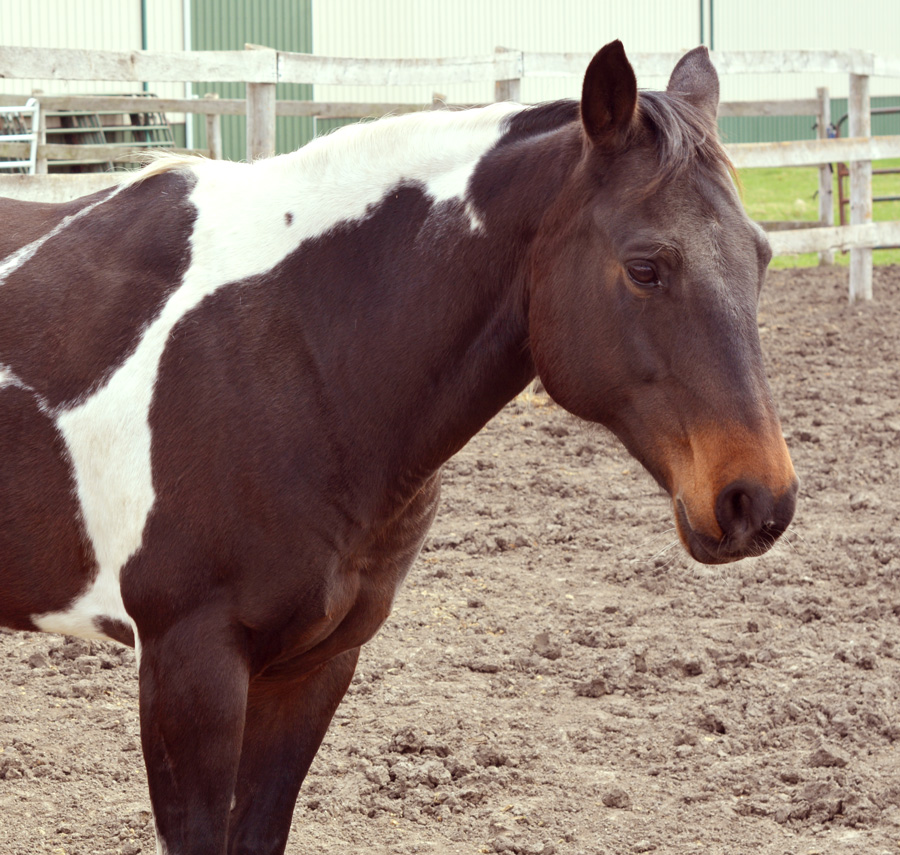 Gypsy is a beautiful Paint horse who is highly sensitive and sweet. She has a remarkably smooth gate, and is more of a free moving horse. Darren acquired her from a client who bought her to use as a trail horse. However, they decided she was a little too much horse for their skill level and decided to rehome her. With a little training she has become a relaxed easygoing horse.